Sticks and stones will break my bones

but words will never hurt me. 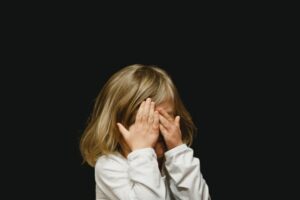 That is an absolute lie.  Words do hurt. They not only hurt, but they can also have a sting that forever lives in one’s inner core.  As parents, we oftentimes feel what our children feel. When they hurt, we hurt; albeit an illness or emotional harm.   If you’re a parent of a child who has low self-esteem or has been the victim of bullying, then you probably understand this better than most.

Children with low self-esteem are likely to internalize what is said to them which may lead to ruminating thoughts.  Rumination is when one dwells on negative thoughts, focusing on what they’ve done wrong and what they should’ve or could’ve done differently.  These circling thoughts may lead to a negative self-image.

According to the official government website, stopbullying.gov, “The most common types of bullying are verbal and social.”  Some studies suggest as many as ⅓  of US school children report that they have been bullied.  All of these statistics are alarming but when they hit home, they hit a little differently.

We send them out into the world and hope that they’ll be okay but sometimes we can’t be there to shield them.  Since building a fort and never letting them leave isn’t a healthy option, how do we help protect our children from harsh words?

As infantile as it may seem, providing your child with positive affirmations before, during and after incidents or periods of verbal abuse may in some ways, safeguard children from being as affected. Let’s be clear, positive praise isn’t a substitute for therapy. Therapy is always strategic and usually long-term. Therapists teach clients essential coping skills and techniques to unpack emotional baggage in a safe environment.  In addition to seeking professional treatment, parents and educators can pump great energy by way of positive affirmation into children which, in turn, combats some of the negativity that may be thrust upon them. Just as “sticks and stones will break my bones but words will never hurt me” rings in song in most of our heads as we repeat it, positive affirmations work the same way. 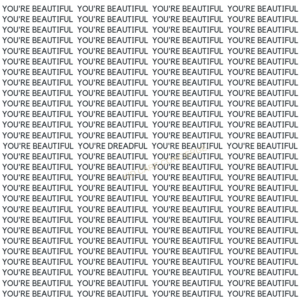 Hopefully this visual can illustrate the effectiveness of positive words.  Do you see the one phrase that doesn’t fit?  It’s enveloped amongst positivity.  It’s difficult to spot. It’s not isolated. It doesn’t really stand a chance amongst the warm insulation of what surrounds it.

When one of my daughters was in the second grade, she began to feel isolated and ultimately bullied by some of the girls in her grade.  She attended a small school with less than thirty children per grade, so it was very easy to feel isolated.  I heard her crying to herself one evening long after she was supposed to be asleep.  When I inconspicuously asked her about what was bothering her over morning breakfast, she revealed that some of the girls were saying mean things and talking in front of her as if she were invisible.  I’ll be honest, the initial wave of anger had to dissipate before I could think with a completely sound mind.  I realized I need to do something to cure her wound that was, for the first time in her young life, not physically visible.

Since my girls were born, I made a conscientious effort to greet them every single morning with a cheerful “Good morning!”  I just believe that children should wake up knowing that someone is happy to see them and is looking forward to speaking to them.  I’ve also taught them to greet me the same way.  I don’t give much care to the whole, I’m not a morning person thing.  One of my girls is a complete morning person like me, the other is the complete opposite.  My rule is that we don’t have to have long drawn out morning conversations until you’re ready but we will acknowledge our appreciation for seeing each other wake to experience another day by greeting one another upon first glance.  It’s now a natural occurrence and unbeknownst to them, I’ve also taught them that they are worthy of acknowledgment by not only myself but by others around them.

Once this incident happened, I began pumping them with morning affirmations.  One of my favorite things to do was crawl into bed to steal a few morning minutes with my little ones.  While there I’d whisper:

You are kind. You are smart.  You are beautiful.  You are an amazing person.   Today is going to be a great day.

She resisted me at first but that too became the norm.  After she got used to me saying it daily, I had her repeat it with me.  When other instances of bullying occurred, I’d remind her of her greatness and put in perspective that what her peers said didn’t matter.   Positive thoughts and phrases are easily incorporated into the school day, administrators can share them during morning meetings or over the intercom for daily announcements.  Teachers can start off or end classes with words of encouragement.  Kids thrive when they know they have a sound support team.

More and more, great schools are incorporating positive affirmations into their school day.  Parents and instructional leaders must be partners in the educational process every step of the way.  This partnership must include a process that eradicates bullying as something that just happens, particularly in middle schools.  Long gone are the days where we dismiss the cruel effects of verbal harassment and physical violence with “boys will be boys” or they’re just “mean girls”.  As a society, we now know better, so it’s important for adults to do better by understanding and emphasizing the importance of speaking positivity into existence.  When speaking to children, think back to the key principle that we all learned in kindergarten, use your words. Just remember to use them wisely because words do hurt and what we say matters.